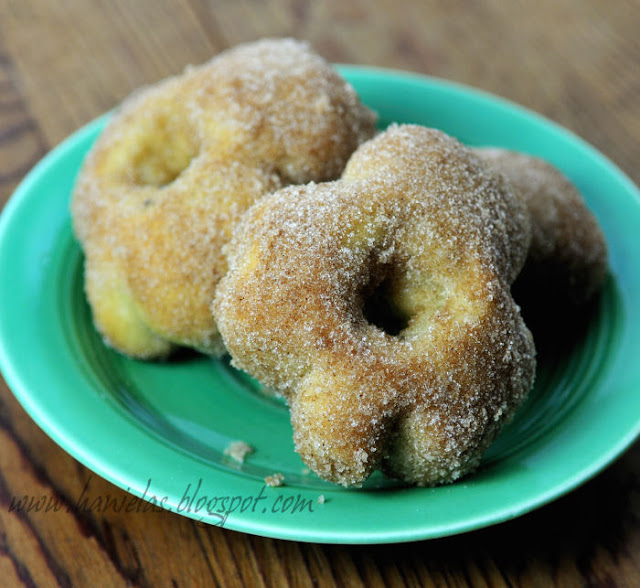 I’m guilty of eating  lots of bananas: fresh, cooked, baked, chocolate dipped, that’s me. Most people buy a bunch I buy 2, and that will last me maybe till midweek, maybe longer, but what if one banana is just not enough, I rather have more than not enough bananas.

Bananas are great, you can pick them green and they just  keep getting happier and  richer in flavor. Honestly though, eating a banana usually gives me much needed energy boost, they are full of natural sugars and are rich in potassium and have some iron and fiber too. Excellent fruit.
I haven’t had a store bough donuts in 9 years, though I occasionally indulge in a homemade donut. Today I made Banana Donuts, first I was a little skeptical about banana and donut combination but now that I’ve eaten a few I must say they are delicious. Next time dough I think dip them  in ganache instead. 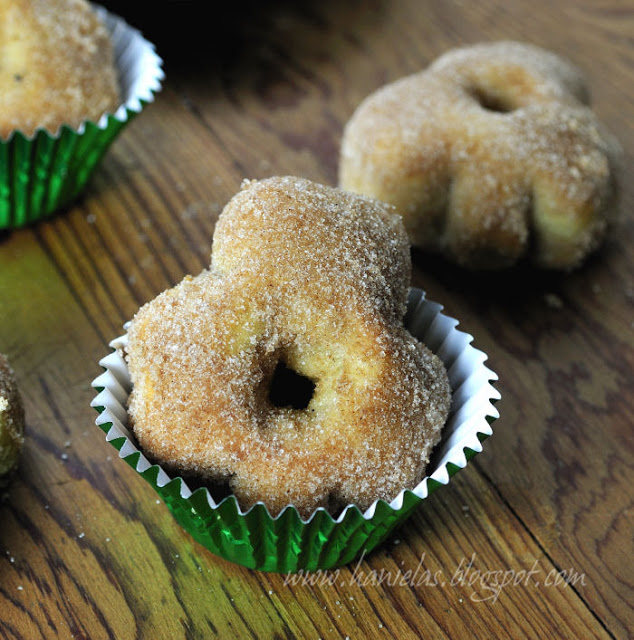 Baked Banana Donuts (about 15 medium/small donuts plus mini center cut outs)
1/4cup warm milk
1 1/4tsp instant dry yeast
1/4 cup brown sugar
3tbl granulated sugar
2tbl butter, melted and cooled, or use oil instead
1/2cup banana puree(about one banana)
1/2tsp table salt
1/8tsp nutmeg(best using freshly grated)
1/8tsp cinnamon
1tsp vanilla extract
1tsp dark rum
1egg
2egg yolks
1 3/4 cups bread flour, plus more for dusting the work surface
Butter-Cinnamon Sugar Coating
Cinnamon Sugar – 1 cup granulated sugar add 1 to 1 1/2 tsp cinnamon, stir well and set aside
4tbl butter, melted
You can also use Cinnamon Sugar Mixture from King Arthur Flour, their cinnamon sugar has a super fine texture and it melts in your mouth, worth trying.
Yeast Donut Dough
In a the bowl of your mixer, combine warm milk(not hot) add dry yeast, and a pinch of sugar, stir and let this mixture sit for about 5 minutes, until it gets foamy.
Melt butter and let cool.
Fit the mixer with the paddle attachment and to  the yeast mixture add sugars, egg and egg yolk, melted and cooled butter, salt, vanilla extract and banana puree. Beat until until well combined.
Change the the paddle attachment for the hook attachment and add flour. Knead the dough until it starts pulling away from the sides, if the dough appears too wet, add additional flour, adding by tablespoons until it pulls away from the sides. Dough is soft.
Lightly coat a medium size bowl will oil. Dump the dough onto a lightly floured surface and knead gently  for few seconds to form a ball then transfer the dough into the oiled bowl. Cover with plastic wrap and let rise in a warm,  location for 1 1/2 hours. Dough will not rise too much.
Cutting the donuts
Dump the risen banana dough onto a lightly floured surface, gently gather dough together by kneading it for 30 seconds, then roll the dough into about 3/4 inch thick and cut out as many donuts as you can, re-roll the scraps.
I used a shamrock cutter and for little holes I used the wider side of a medium/large piping tip or if you have a small round cuter use that or skip the whole shamrock thing and use a round donut cutter. Doesn’t really matter. If you have a donut cutter use that if you wish.
First though I placed the shamrock donuts onto the baking sheet lined with parchment paper and then I cut out round centers. This way I didn’t have to transfer shamrock donuts, keeping their shape intact.
Cover baking sheet with clean kitchen towel and let rise again for 1 1/2 to 2 hours.
Preheat oven to 400F
Bake the donuts  for about 8-10 minutes, rotating the baking sheet once, donuts should be golden on the top.
Remove baked donuts from the oven.
Coating in the Cinnamon Sugar
Just as you take the donuts from the oven while they are still hot using a pastry brush to assist you dip/brush donuts with melted butter and then toss them in cinnamon sugar. Transfer still hot and cinnamon sugar coated donuts to a clean plate, let cool and enjoy at room temperature. Baked donuts are best eaten the same day they are baked. 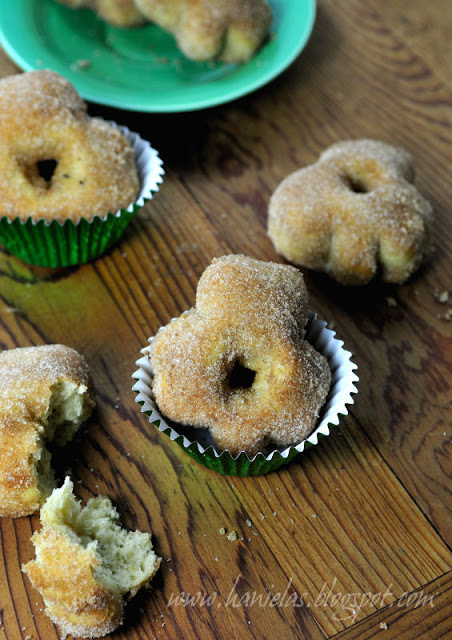